Not so long ago, people of all ages and prominent European personalities could be found in Spa. There were numerous events, but the one with the most success was certainly the Casino.

Since then, the Casino needed to evolve with time.

More recently, the Casino is available for everyone.

The Casino welcomes you on their slot machines and playing tables, but you can also just meet up for a drink, one of the many thematic events or simply an interesting evening with family or friends.

Our team is here to welcome you, initiate you in our games or to help you have a great evening. 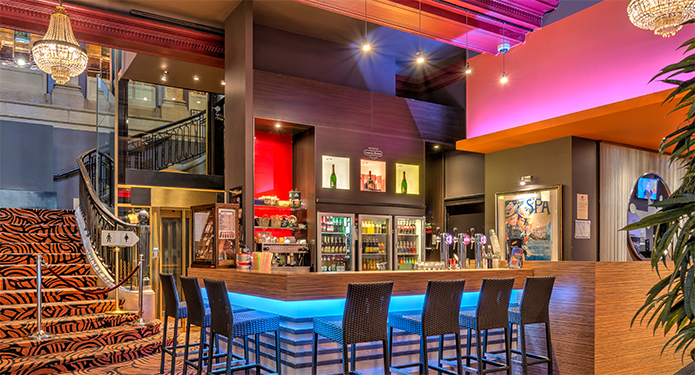 In the 18th century, gambling had a huge development in all segments of society. They were played in royal courts, aristocrat saloons, by the « bourgeoisie » but also in pubs, cabarets and of course casinos

The Prince Bishop obliges the magistrate in 1762 to open a hall especially for gambling.

While the games were banned in the city of Spa during the French occupation in 1794, Napoleon signed a decree, 12 years later, to allow playing the games again.

Because of the success of la Redoute (the former name of the Casino de Spa) and despite a privilege of games – la Redoute was the only hall authorized to organize gambling – two other halls were added at the end of the 18th century: the Waux-Hall and the Levooz salon.

The competition is fierce and is at the base of the quarrel of games in Spa in 1785. That quarrel was also partly at the origin of the Révolution Liégeoise which broke out in 1789 in the aftermath of the French Revolution.

1918 : Reconstruction of the Casino following numerous fires during the World War

2004 : The first slot machines appear in the Casino

2012 : Movement of the game rooms to the ground floor to make space for an event hall called la salle Bergman

2014 : Broadcasting of the first live roulette in Belgium on 777.be by the Casino de Spa.

2015 : Placement of the first live studio in Belgium.

2017 : Change in the Casino : The brasserie received a larger area, and opening of a smokers area equipped with slot machines.

Since its creation up until today, the Casino de Spa had a constant evolution, trying to create the environment you deserve.